A Tribute to Every Fathers, Happy Father’s Day! 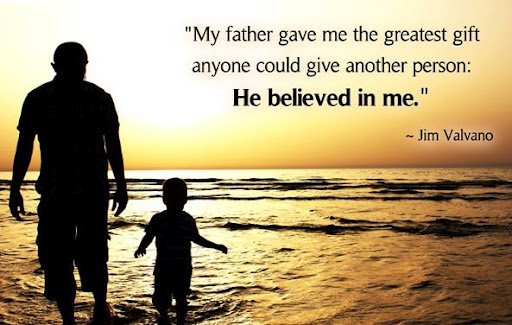 “My father gave me the greatest gift anyone could give another person: He Believed in Me”

June 19, 2016 is Father’s Day and I’d like to pledge this post to all the wonderful dads, father figures, and male mentors out there who have affected the lives of people out there: be it your own kids, others’ kids, your family, people you’ve mentored, people you’ve coached, and the world at large. Thank you for all that you done. Thank you for being you. I appreciate your existence and the often times silent but impactful role you have played in our lives.

Every hug you give, every joke you share, every minute you listen tolerantly, every time you take a deep breath and see things from your child’s viewpoint, every time you be role model for your child on how to show up with honesty, you’re shaping child into a person who will make you delighted on fine day. The perfect time to honor every Father who shows up for his children. It’s not an easy thing, being the best father you can be. But you all are make a huge difference child’s life — now, and every day of child’s future.

So if you’re a Father, please accept my sincere appreciation.  Whatever else you may achieve in your life, it is nothing as great in comparison to being a father. The duties, the responsibilities, the pain and the efforts you endure and take for your child and family is beyond any words.

Now, to honor the contribution of Fathers, let’s consider some recent research findings that may surprise you. Did you know that?

Speaking about “Fathers’ Rights” in India results in raising lot of shocked eyebrows as Indians are totally unmindful of such a term present in our public system. However with the widespread increase in no. of split-ups in India there is an unrelenting need to not only spread attentiveness about this ‘not-so-talked-about’ topic but also urge the Indian Legal system to come out of the decade old era of long biases of granting authoritarian parenting privileges to mothers over fathers.

Today fathers play just as important role in the nurturing of children and their significance in no way can be demoted by the marital conflicts between the couples. The onus lies on law lords to adopt a fair & unprejudiced approach while passing the custody/visitation orders so equality can be established in what otherwise is a highly biased domain

While the researchers and doctors agree that parental alienation due to divorce or separation has an adverse effect on a child’s psychology, divorced or separated fathers are often left to suffer and deal with the alienation. Marital discords are on the rise and with that the role of law lords becomes utmost important to ensure that “Fathers’ Rights” are not compromised. The biased nature of Indian Legal system has always endorsed custody of children to estranged wives and at the same time eschewed fathers from even meeting with them. Wives have used this bias attitude to an extent of lawful kidnapping of children. Children are widely being used as a weapon to extort money from the fathers in the name of maintenance and any visitation/custody requests from father’s side are strongly opposed by wives. Any court orders permitting the fathers to meet with their children are not either not obeyed by the wives and such disobedience are easily overlooked by the judicial system. Moreover the possibility of wives ingraining all kinds of negative feelings in children’s mind is so widespread that they deliberately don’t let the child meet their fathers and grand parents. Their only motive is to seek personal retaliation and win the dirty self-initiated fight against the husband, and in order to do so they use children as a tool without understanding the toxic effects this could have on the child.

Because of the laws in India which are lopsided towards the mother, Law Commission of India had recommended for sweeping reforms in existing laws in their report “Reforms in Guardianship and Custody Laws in India” of May 2015 which is yet to see the light of the day. Children’s are still being a victim to custody matters, And 95% cases mother are eventually are selected as the custodial parent (CP) of the child and fathers are Non-Custodial Parents (NCPs) who are just considered nothing more than a ATM Machine, a Visitors or a Criminal who ultimate goal is only to end up paying for his child’s maintenance even without a hope of seeing or meeting his child who could have been separated for days, months, years may be in some case for their entire lifetime even after paying child support regularly.

Hence as a results of such biased lopsided laws, as a step towards equal parenting we demand the following:

We at Vaastav Foundation are raising our voice for our rights to be heard, that we too should be considered as human beings, as a part and parcel of the society and not as provider of economic support to nation but also as human beings who’s demand for rights needs to be heard, to have gender neutral laws, as fathers – the right in raising our children. Don’t view us as ATMs or devoid of emotions and love. We too are human beings, with feelings of care and affection for our child and family.We request our friends in media and society alike to join us in making the event a success. We intend to have a dharna at Azad Maidan, Mumbai and signature campaign at CST Station on June 18, 2016 as we fight for what we truly believe in

“Fatherhood is a biological right NOT a court driven fight”

Each one of us can make DIFFERENCE. Together we make CHANGE