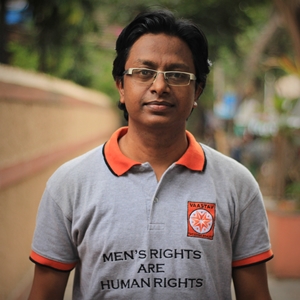 Cause: Men’s Rights and Gender Equality

Profession: Regional Manager in an MNC

I am a Men’s Rights Activist from Mumbai and have been involved in social issues activism from the past 7 years. I am fighting for gender equality in the society through men’s rights activism. I am one of the founders of the NGO Vaastav Foundation a one of its kind organization that focuses on the well-being of boys and men. We have been featured in Television programs, debates, newspaper articles and I have also got the opportunity to write articles, including on front pages of leading dailies and magazines.

Free Counselling: Vaastav Foundation works to highlight the issues of men which have been hitherto neglected by the society. Every 7 minutes, one man commits suicide in India. This issue has been ignored for long. We run the only privately managed Suicide Helpline exclusively for men on 8882 498 498 with other NGOs under the banner of Save Indian Family. We conduct weekly meetings in Mumbai at three places – Borivli, Mulund and Vashi. Every week about 120 people get free counseling from our meetings to help men cope with pressure of facing false cases and to avoid suicide.

Vaastav Foundation believes that children’s best interests are with having access to both the parents and hence promotes shared parenting through campaign for Father’s Rights. India still does not recognize the issue of Male Rape and Domestic Violence on men, we are fighting to make these issues known and that justice be provided to the victims. We focus upon the neglect of boys education where in the school drop out rates of boys is higher than that of the girls and almost 6 times more boys are employed as child labour, as compared to girls.

Research on Suicides in India: I have worked with a PhD student on the topic of ‘Explorative study on the Suicides in India’ studying the suicide statistics of the India through the records of National Crime Records Bureau for the past 50 years. This report was released on eve of World Suicide Prevention Day on 10th September 2014 and was covered in more than 32 news publications world wide.

Speeches and Talks:
Need for Men’s Rights is a prestigious TEDxTalk I had given at TEDxJuhu which has been shared on various international forums. This talk describes the need for men’s rights  in our society by discussing statistics on suicides, death rates and their causes, crime against men, school drop outs of boys, false cases on men, male rape among many other things.

Orphanage Visits: Vaastav Foundation in my tenure as President has conducted visits to orphanages on the occasion of Father’s Day, by helping fathers deprived access to their children to spend some time with kids and helping kids living without family to get some affection.

Participation in Marathon: We participate in Mumbai Marathon and highlight our issues through wearing attractive costumes which convey our messages. In 2016, we participated as an ATM to show men should not be seen only as an ATM by the society. In 2017, we participated with a ‘prop’ of a snake which helped us showcase all social evils men face in India due to Misandry.

Literature on Men’s Rights issues: My talks usually cover the content from my TEDxTalk link given above describing the pressures a patriarchal society puts upon men, the rates of suicides of men, insensitivity of society towards well being of the men.

I have been featured in many media articles and on TV debates. Some of them are here:

We got the First Prize in Yes! I am the Change campaign from Yes Bank in short film category: Movie Name: Equal Rights

We created this short film based upon true story about law misuse: The Flip Side: Short Film

An answer to My Body My Choice: I Chose You

There is a lack of positive space for men: Daily News and Analysis

These are few of my many appearances in media on behalf of Vaastav Foundation.

Past Experiences in Social Activism:

MASHAAL (Mothers and Sisters of Husbands against Abuse of Law) – Convenor

Earlier, I was active with the Anna Andolan and one of my article that described the atmosphere at the Azad Maidan during Anna Andolan had featured in DNA.