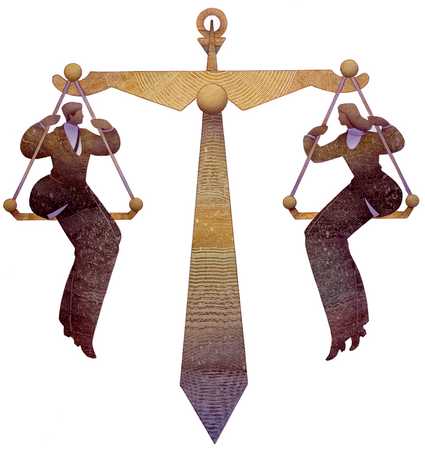 We have great women leaders in our country or belonging to Indian origin, born and brought up at a time when we considered our society to be patriarchy. This in itself says that the true opportunist looks for the progress than to resorting to unethical means for gaining popularity and equality. These are well known personalities who chose the right path for equality. To be equal one needs to put in hard work and dedication and does not need support of biased laws. By means of biased laws, rather than making women independent we are making them more dependent by means of various maintenance and amount that are granted to them under various biased laws.

The aspect needs a serious consideration in today’s time of 21st century. Let’s understand that an unjust law is no law at all. By virtue of having given an armory of biased laws, the women have been given an uncontrolled and unfettered power to misuse law. Further, they are made more dependent rather than making them independent. By making them more dependent, we are doing no good and infact encouraging more talented women to sit ideal thereby wasting the precious talent of the country. The intention of the legislature is to help needy and not greedy and as rightly said by the Hon’ble court in Mamta Jaiswal vs Rajesh Jaiswal, Madhya Pradesh High Court decided on 24 March, 2000, “Section 24 is not meant for creating an army of such idle persons who would be sitting idle waiting for a ‘dole’ to be awarded by her husband who has got a grievance against her and who has gone to the Court for seeking a relief against her. The case may be vice versa also. If a husband well qualified, sufficient enough to earn, site idle and puts his burden on the wife and waits for a ‘dole’ to be awarded by remaining entangled in litigation. That is also not permissible. The law does not help indolents as well idles so also does not want an army of self made lazy idles. Everyone has to earn for the purpose of maintenance of himself or herself, at least, has to make sincere efforts in that direction. If this criteria is not applied, if this attitude is not adopted, there would be a tendency growing amongst such litigants to prolong such litigation and to milk out the adversary who happens to be a spouse, once dear but far away after an emerging of litigation. If such army is permitted to remain in existence, there would be no sincere efforts of amicable settlements because the lazy spouse would be very happy to fight and frustrate the efforts of amicable settlement because he would be reaping the money in the nature of pendente lite alimony, and would prefer to be happy in remaining idle and not bothering himself or herself for any activity to support and maintain himself or herself. That cannot be treated to be aim, goal of Section 24. It is indirectly against healthiness of the society. It has enacted for needy persons who in spite of sincere efforts and sufficient effort are unable to support and maintain themselves and are required to fight out the litigation jeopardising their hard earned income by toiling working hours.”

A common trend witnessed is that whenever a woman wants to get out of a failed marriage, she tends to make this as an earning opportunity with the armor of biased laws favoring her. She cries foul and portrays herself as a victim and gains all possible sympathy from all. The willingness of the woman to move out of failed marriage is thus made an opportunity to extort as much as possible by crying victim. Such facts have also been realized by the courts and the courts have to an extent agreed that the laws made for protection are used for extortion.

It is high time to wake up to the reality that we live in 21st century but our laws, especially matrimonial laws belong to ancient times. Women no longer are dependent on her male counterparts. Rather the trend has changed. With so many reservations happening for women, the men are slowly and gradually on the verge of losing their job. The myth that we live in patriarchal society needs to be done away with at the earliest. One sided law favoring the greedy in the guise of being needy needs to be done away with. It is high time our system needs to wake up and be fair to men as well. All this while men have just been treated as an ATM machine who is expected to suffer all but remain quiet. Harsh reality of today is that the men is a silent sufferer and has no means to open his heart out for the injustice done to him, by literally everyone he comes across in the system, whenever he is implicated as accused in the biased law.

Remember having justice is also a fundamental right of a man and he is also entitled to justice. The constitution of India gives this fundamental right of justice to all including men. The true sense of civil society lies in being progressive and an equal level playing field for all. The myth of being in a patriarchy society needs to be done away with.

Twitter
Facebook0
Twitter0
← Response and FACTS by Marital Justice to Ministry of Women and Children Development for NRI issues
→ The epic that could have been in Kalyug
Tags: Equal Justice, Gender Bias, Section 24